PT. SEAPI was established in 1996.located at Bakauheni Village in Southern Lampung. In 1999 PT.SEAPI obtained API-5L license from the American Petroleum Institute for the oil and gas industry, so that in the same year 1999 PT.SEAPI began its commercial production processes for the customer, PT.MacDermott Indonesia.

In February 2001, SEAPI signed a cooperation agreement with PT. Thenaris, one of the world's greatest pipe producers.
As one of the greatest pipe producers in Southeast Asia, in 2002 PT.SEAPI managed to export products in Iran project Kallanaft country to Iran.
Steel pipe products are produced by PT SEAPI such as API 5L Grade A, B, x42 up to X80, API 2B, DNV OS-F101, ASTM A252, ASTM A139 in addition to producing, PT.SEAPI also always been committed to providing reliable products to the level of quality assured and timely delivery.

This is evident from a license based on API and TUV Rheinland, SEAPI has several certificates :


In addition to product certification and quality management as stated above, SEAPI also has a certificate management on Occupational Health and Safety OHSAS 18001: 2007 under number 01 100 1633343, and Enviromental Management ISO 14001:20015 under number 01 104 16 333 43. As indicated by its name, SEAPI designed to meet the needs of steel pipes in Southeast Asia region.
Share : 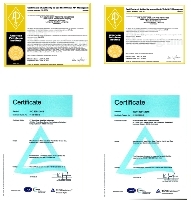